On Saturday morning, April 29, the weatherman said that the marine layer had moved into the L.A. Basin, and it was a typical overcast June gloom type day. The news anchor quickly remarked that he couldnâ€™t call it â€œJune gloomâ€? because itâ€™s only April!

This is a view of the cloud-shrouded hills east of San Bernardino along Hwy 330:

After passing through 4500 feet elevation, travelers on Hwy 330 rose above the clouds into clear, warm, sunny weather:

Boaters and fishermen were enjoying the spring sunshine at Big Bear Lake:

After Chris blew out the candles and we ate the birthday cupcakes, we headed for the 2N84 trailhead, where we were met by Greg Hoffman, USFS OHV Coordinator. Since Gregâ€™s USFS Jeep did not have a CB radio, Greg rode with Kurt (rat patrol) and communicated the trail maintenance plan to us in real time while he wrote it up.

Our first project was to dig a diversion channel to divert runoff to the side of the trail:

Here is the completed channel, lined with rock:

Meanwhile, Kurt and Greg continued up the trail to the location of the directional signpost we had installed last year near the summit of Little Bear Peak:

Tom (Blk & Tan TJ) provided a sack of cement. We enlarged the hole, mixed the cement and packed it around the base of the sign to give it more support and prevent misalignment.

We continued the survey. Greg pointed out a fallen tree that was resting on the trail. Brian (Brian4.2) quickly rigged up his winch line and dragged the tree off the trail.

Mission accomplished; the fallen tree has been moved so that it is resting below the shoulder of the trail:

We continued on 2N84C where there was a much larger tree trunk obstructing part of the trail:

After considerable discussion and disagreement about the best way to remove the tree, Brian (Brian4.2) hooked up his winch to the tree. His plan was to pull the lower end of the tree toward his Jeep, which would cause the rest of the tree to pivot in the middle and come to rest on the trail. Then we would winch it over the edge of the trail:

In order to anchor his Jeep, we tied three more Jeeps together. Greg told us later that anchoring the Jeeps by connecting the rear of one Jeep to the front of the next Jeep is a BAD IDEA because it causes the load to be transmitted through the frame of each Jeep and could possibly cause the frame to become distorted. It would have been better if we had attached the anchor cables and straps from each Jeep to a point as close as possible to the winch mounting point on the winching vehicle (Brian4.2â€™s Jeep). 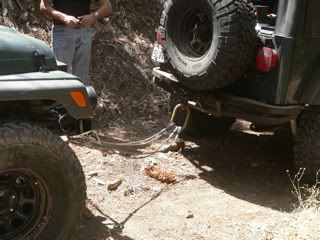 As Brian winched the log toward him, the downhill end of the tree trunk plowed a furrow in the trail:

Brian finally pulled the tree down to the trail:

Then we connected winches to both ends of the tree and proceeded to drag it off the trail:

After disposing of the tree, the trail crew proceeded to the site of the rock fall just before the end of 2N84B. Greg explained that we could turn the site into a rock garden, but we must do so in a way that would not damage the environment. We could only use rocks that were on the surface; we could not dig up any rocks:

We proceeded to gather and re-arrange the rocks. We obtained most of the raw material by rolling the loose rocks from the hill above. By the end of the day, this is what it looks like. We still need to do more work at this site: